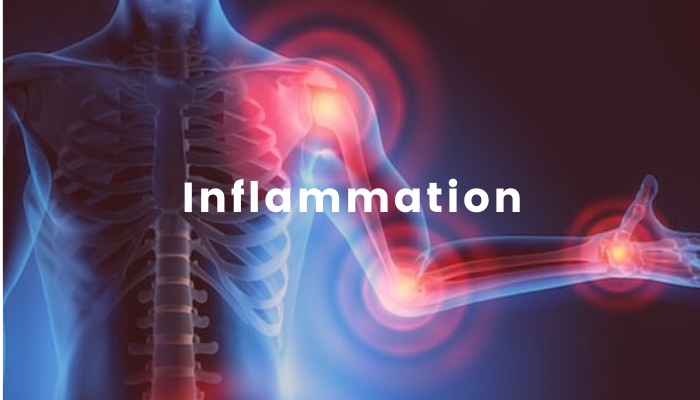 In a recent podcast with Dr. Comella, the topic of Inflammation took front and center stage.  Be sure to watch the podcast.  Here I’ll provide a bit of additional support to help you understand why we are often heard blaming inflammation as the underlying “cause” of dis-ease.

Watch the podcast, then continue reading below

Red, sore, and swollen.  That might describe the inside of your throat if you picked up an infection, or it might describe your knee if you sprained it reaching for a backhand playing recreational tennis.

We’re used to seeing inflammation and associating it with illness or injury.  A splinter in your thumb leads to an inflamed area around the site of penetration and a baseball whacking you in the eye leads to . . . yes . . . inflammation.

Inflammation is a wonderfully protective process, a job performed by your immune system, and in a state of health, that immune system handles the task extraordinarily well.  A well-tuned immune system is your very best friend as it serves as both, the alarm system that alerts you when an invader enters your body, and the SWAT team that goes to work to wipe out the invaders.

When that splinter slides into your thumb, little tiny microbes come along for the ride, surfing through your skin ready to enter the bloodstream and colonize . . . but that trustworthy immune system goes right to work.  It immediately prevents any foreign microbes from going any further.  It inflames the area, sends little warriors to clean up the mess, and then aids in rapid and complete healing.

Clearly, in any battle between your body and pathogens, your immune system and its inflammatory ability are the good guys.  That’s why at first you may react when I tell you that the dis-ease epidemic we’re seeing in the 21st century, the escalations in heart disease, hypertension, complications of diabetes, and other diseases we mistakenly associate with aging, are the result of inflammation, or better stated, the immune system gone rogue.

How does this happen?

To simplify a complex process, let’s recognize the hypothalamus as the control center of the brain, as the air traffic controller for all of the millions of chemical transactions and interactions that take place between and among the endocrine glands, each one a home base for hormones.

Despite its tiny size, the hypothalamus is more than a hormone manager.  It works non-stop to maintain homeostasis, balance within the body’s internal universe.  When an alien invader finds its way into that universe, be it through a skin puncture, inhalation, ingestion, or transdermally (through the surface of the skin), the hypothalamus begins a chemical chain of events that signal the liver to manufacture a protein that drives the inflammatory process.  That protein, C-Reactive Protein (CRP), elevates rapidly and in that, the acute inflammatory response can quickly subdue any invader and restore normalcy.

With CRP circulating, the immune system develops an enhanced awareness of the location and severity of the problem and begins to send out its little ninjas, cytokines, to go directly to the problematic site and begin the inflammatory process.  The redness, soreness, and swelling you may experience when your innate software is running an inflammatory program are evidence that things are being handled.  The nearby tissues are being protected, the alien microbes or pathogens are being isolated and eradicated, and the body’s innate repair process is in motion.  That brings us back to the question, how can this powerful fix-it mechanism be the cause?

In the 21st century, we face toxins, stressors, and environmental factors in volumes we’ve never known before.  When the body’s innate inflammatory response is triggered, not by a pathogen that can be fast eliminated, but by a chronic and ongoing stressor, CRP circulation becomes chronic.  With CRP actively elevated, cytokines are called to act, and without resolve, that continued CRP elevation creates a literal cytokine storm.  With time, the body’s innate protective mechanisms become confused, the body longs for a recovery state, and the inflammatory switch gets flicked . . . without any opportunity to go back to the “off” position.

As an example, imagine a smoker smoking his first cigarette.  Tar and nicotine enter the respiratory tract and the liver is alerted beginning the systemic flow of CRP.  As they’re transferred from the smoking cigarette into the bronchial passes, those pathogens, tar and nicotine, are on the move. They travel through the lungs’ tiny passageways and find their way into the bloodstream.  They’re taking a wild journey through arteries and veins never resting to affect an isolated location.

The cytokine warriors are activate and mobilized in pursuit of the pathogens, ready to inflame, but as the tar and nicotine move, there’s no specific “site” of injury to be inflamed and rescued.  If the cigarette smoking was an isolated incident, as the blood clears of nicotine metabolites, all would return to normal, but if it’s the beginning of a pattern of invasion, things run amok.

The smoker decides to try another cigarette two hours later and the process repeats.  The tar and nicotine, along their travels, do some cellular damage.  The injury is small and nearly insignificant (we refer to it as microinjury) with each cigarette, but as the smoker develops the habit or 20 cigarettes a day the tiny episodes of damage are perpetual.  Ongoing.

We can call that ongoing injury “chronic cellular damage.”  The immune system becomes frustrated in trying to catch the individual invaders, so it learns to keep the cytokines flowing, non-stop.

Eventually the entire respiratory system or circulatory system becomes inflamed.  We can refer to this rogue behavior of an innate well-meaning process as a maladapted response.  The brain’s programming gets altered, and with it, the systems respond to flawed programming.

In the case I just described, the inflammatory response came with good intentions, but it led to a sort of attack, a low-level but constant attack, on the body’s own systems.  With narrowed respiratory passages or narrowed arteries (due to inflamed walls) the entire process creates chronic lung disease and/or chronic heart disease.

That’s an example that should serve to illustrate how chronic microinjury can lead to systemic disease as an outcome of the inflammatory mechanism.

Once the “inflammatory switch” gets locked in the “on” position, any stress on the body or cells drives or amplifies that problematic inflammation.  Here are a few of the causes of escalation or amplification of a maladapted inflammatory condition.

This is an abbreviated list and each of the above factors merits an article in and of itself.

Why is this important to know?

Understanding 21st century disease as inflammation gone rogue is vital to “cure.”  The current medical paradigm invites practitioners to identify symptoms, establish a label (diagnosis), and use meds that at best “manage” the condition, change the markers, or alleviate discomfort.  The restoration of health will come from a strategy that reverse the inflammatory process and helps move that switch back to the off position.

It’s also valuable to note that CRP serves not only as a part of the inflammatory process, but also as a valuable marker to determine health and risk.  In individuals with chronic disease, reduction in CRP over time correlates with a reduction in inflammation and risk.  In acute inflammation, CRP elevates very quickly and drops as soon as the injury is resolved.  Chronic elevation suggests a continued elevation in cytokine activity which, unresolved, may perpetuate the disease process.  CRP is not commonly used as a “state of health” marker, but with the unfolding of new science, it’s clear that it should be given greater focus in assessing health.

How prevalent is inflammatory disease and what ‘labels’ are better understood as outcomes of inflammation?

If we anecdotally consider the prevalence of those diseases that we already accept as inflammatory, arthritis, irritable bowel disease, etc., we’d get a sense that inflammation is having negative impact on our population, but that’s short-sighted thinking based upon an old paradigm.

When we look at data from the National Institutes of Health and the World Health Organization, we can identify seven of the 10 Leading Causes of Mortality in the U.S. to diseases often having inflammation as their root cause.

It’s important to note that the common causes of mortality not related to inflammation are related to accidents, suicides, and acquired infections.  With that in mind, it’s fair to say Inflammation is the Root Cause of All Chronic Disease, and with that, if we can reverse the inflammatory process, we can move back toward health.

About the M3 podcast

M3 – Mind, Muscle & Medicine, is an informative and entertaining podcast aimed at helping people from all walks of life find betterment. Subscribe to our channel and view all past episodes here.